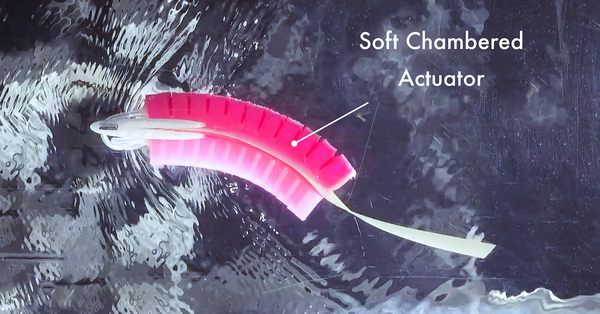 A team of scientists from the Max Planck Institute for Intelligent Systems (MPI-IS) in Germany, from Seoul National University in Korea and from Harvard University in the US, successfully developed a predictive model and closed-loop controller of a soft robotic fish, designed to actively adjust its undulation amplitude to changing flow conditions and other external disturbances.

Their work “Modeling and Control of a Soft Robotic Fish with Integrated Soft Sensing” was published in Wiley’s Advanced Intelligent Systems journal, in a special issue on “Energy Storage and Delivery in Robotic Systems”.

Each side of the robotic fish is lined with soft artificial muscles made of rubber-like small silicone chambers. Through these pockets, the researchers pumped air alternately on each side. While the air pockets on one side expand, they create a curvature, contracting the air pockets on the other side. This causes the robotic fish to bend right and left, swinging its tail, resembling the wave-like movement pattern seen by real fish.

To measure the bending, the scientists embedded state of the art soft strain sensors, consisting of a thin layer of windy microchannels filled with liquid metal and encapsulated in silicone. What was now like a wire, could stretch like a phone cord to a length of 900%. The more the air pressurized each silicone chamber of the actuator, the more the sensor placed atop bends, and its liquid metal ‘wire’ was elongated. The scientists then connected the sensor to an Ohmmeter to measure the electrical resistance. The greater the stretching elongation, the higher the electrical resistance within the ‘wire’. This number provided the scientists with data of how the curvature of their robotic fish changed given a certain change of air pressure.

The scientists then put this robotic fish platform under water in a flow tank. In several experiments they tested how the air pressure controller took the reading from the sensor to measure the swimming performance of the robot – an information loop that was feeding a self-learning algorithm inside the controller to push just the right amount of air through the pneumatic pockets so the swimming perfectly matched the different water flow velocities.

“We developed a hydrodynamic model that can predict how our soft robotic fish will behave. This builds upon previous findings where we measured peak thrust during swimming with co-contraction and body stiffening, and tested soft sensors in feedforward undulatory motion. Closing the loop with proprioceptive soft sensory feedback allows the robot to respond to different flow conditions”, Ardian Jusufi explains. He is the corresponding author of the publication and specializes on soft active materials, biomimetics, and robotics. Jusufi is the head of the Max Planck Cyber Valley research group for “Locomotion in Biorobotic and Somatic Systems” at the MPI-IS. “Our project builds upon several previous collaborative papers on soft robots and biorobotic modeling of swimming robots. To advance modeling and closed-loop control, our team has combined soft robotics expertise from three continents.”

“In this work, we have used a simple approach to build a data-driven model of a soft robotic fish, and extended it with the controller design. This model could also be easily extended without the need of completely rebuilding it, for example to study the scaling effects of robots or testing different types of sensing techniques”, describes Yu-Hsiang Lin of the “Locomotion in Biorobotic and Somatic Systems” group at the MPI-IS, and first author.

In their publication, the scientists describe the sensors as a completely new design technique, labelling them “hyper-elastic liquid metal strain sensors.” Developed by Prof. Yong-Lae Park and his team at Seoul National University, and Daniel Vogt from Harvard University, they are a true innovation. “In biology as well as in soft robotics, with an entirely soft robot, we have infinite degrees of freedom. That means any part of the body can deform. It is hard to estimate how the fish’s shape changes, because we cannot put an indefinite number of sensors onto its body, as it would be possible with rigid robots with a limited number of joints,” Park says.

“This robot will allow us to test and refine hypotheses regarding the neuromechanics of swimming animals as well as help us improve future underwater robots,” Jusufi continues. “In addition to characterizing the soft strain sensor under submerged dynamic conditions for the first time, we also developed a simple and flexible data-driven modelling approach in order to design our swimming feedback controller. The model will be of interest to the scientific community and will help accelerate future work in design and operation of soft robots. In forthcoming research, we will also utilize soft strain sensors in terrestrial robots that climb and can overcome complex obstacles.”

Understanding the underlying mechanisms how soft animals like fish swim helps in designing artificial soft structures and make it possible to use them to build robots. Such animal-inspired robots could one day be used to explore the depths of the sea and provide valuable data of marine life, avoiding noise and reducing the risk of entanglement that rigid, conventionally propelled submarines face. Swimming robots could also become a more energy-efficient option, which is why more and more scientists have shown a great deal of effort in developing soft actuators and sensors that constantly improve the capabilities of swimming robots by replicating the locomotion of aquatic vertebrates.

What could one-day serve as a more advanced under-water vehicle also serves another purpose: the fish replica with sensory feedback offers important insights into fish neuromechanics and their morphological intelligence, advancing the field of biology. 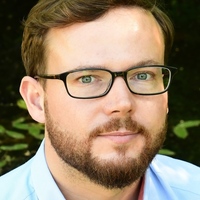